How high the O2 saturation is at any time, is determined by the pO2. The p refers to the partial pressure – this is a measure of the pressure exerted by a gas in a liquid. In this case the pressure exerted by oxygen in blood. The amount of binding of O2 to Hb is dependent on the pO2. Figure 14 shows the relationship between pO2 and O2 saturation. This shows that at pO2 of 90 mmHg, the blood is 100% saturated with oxygen. The figure also shows that at pO2 of 70 mmHg the saturation is above 95% and at pO2 of 40 mmHg is about 75% saturated. 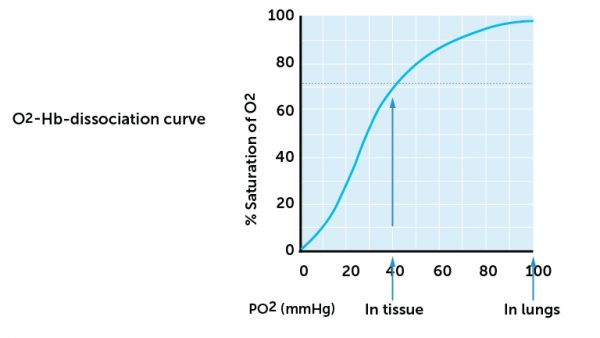 Based on what we know of pO2 values in the body (see above), you will see from figure 14 that the blood leaving the alveoli (where pO2 is 104 mm Hg) is 100% saturated with O2. In the tissues where pO2 is about 40 mmHg, O2 released but O2 saturation of venous blood is still about 75%. Based on this reasoning, it is thus only 25% of the O2 which is transported into the tissues from the blood. The rest will follow the blood back to the lungs. O2 saturation will therefore normally vary between 100% and 75% of arterial and venous blood into the systemic part of the circulation. This means that we have a fairly large reserve of O2 in the blood at any time during normal, resting conditions.

When pO2 drops below 40 mmHg, the curve is steep, and a small change in pO2 below 40 mmHg may have major effects on the saturation. A slight change in pO2 causes a relatively high oxygen diffusion from the blood. A O2 saturation below 75% is a condition called hypoxia (insufficient oxygen).

Hypoxia is a critical condition because a saturation below 75% / 40 mmHg is lower or equal to the blood O2 levels in the tissues. Obviously, the blood can thus not release O2 to the tissues. In addition, the curve is steep and it therefore only takes a small change in pO2 to cause a large drop in saturation. In the worst case, saturation in the blood may become lower than the normal tissue pO2. For this reason, oxygen is given to patients with hypoxia well before this happens.

Blood saturation of O2 is affected by blood O2– and CO2-levels, as well as temperature and pH (remember that pH and CO2 are closely related, as discussed in an earlier section). Figure 15 shows that both increased CO2-level (i.e. lowered pH) and increased temperature decrease hemoglobin’s ability to bind and retain O2. The chart shows that the curves are shifted to the right, i.e. O2 saturation for a given pO2 decreases. This is physiologically an important concept. Increased CO2 level (or lowered pH) and increased temperature is found mostly in active tissues, where energy consumption and energy demand is high. This happens for example in skeletal muscles during physical activity. According to Figure 15, we see that when such physical changes occur, O2 saturation decreases. Decreased saturation means that O2 molecules detach from Hb or bind only weakly to Hb, and therefore diffuse more easily. During increased activity, more O2 is available in the tissues than during lower physical exertion or resting conditions. 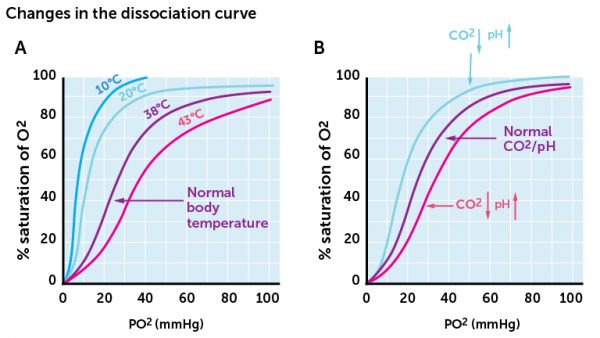