The nasal cavity is divided into two by a dividing wall called the nasal septum. Each of the nostrils lead to each half of the nasal cavity. The air from each half meet and mix completely behind the soft palate.

From the nasal cavity, the air is led into the throat (pharynx). The pharynx is divided anatomically into three regions (Fig. 2):

In the nasopharynx, are the tonsils and the opening of the Eustachian tube. The wall of the nasopharynx has skeletal muscle which initiates swallowing – a voluntary mechanism.

In the oropharynx, air and food are mixed. Here too we find tonsils. At the bottom, in the laryngopharynx, there is smooth muscle that control the swallowing process in an involuntary contraction after it is initiated in the nasopharynx.

Below the laryngopharynx is the larynx (Fig. 2) containing the vocal cords. The larynx is the air passage that takes air into the trachea (windpipe). In the laryngopharyngeal region air is led into the trachea, and the food is directed down the oesophagus So when you breathe, you will not normally swallow, and when you swallow, you do not breathe. The epiglottis (laryngeal cartilage cap) has an active role in this process. The epiglottis controls switching between air and food supplies by bending to cover over the trachea during swallowing and thus preventing food entering the trachea. 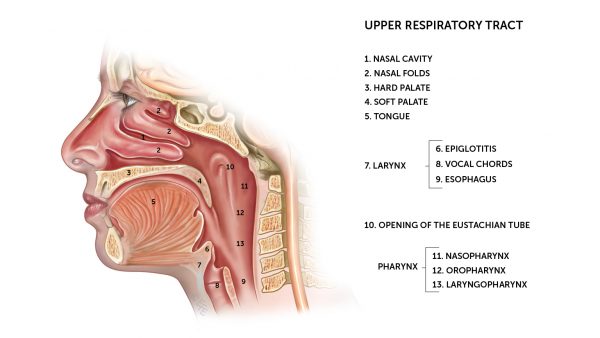